OPTIMUS AGRO is one of the leaders among agricultural enterprises in Ukraine
For many years the company has been in the top five processors and exporters of agricultural products, supplying them to more than 20 countries of the world
IN MORE DETAIL

COMPANY ACTIVITY
SERVICES
OPTIMUS AGRO’s competitive advantage is maximum attention to customers’ needs: the ability to determine the quality at the thrashing floor, the best offer at a price, fast payment, shipment of goods and personal relationships with contractors, built over a lot of years, helped build a reputation and gain trust among farmers.

Storage and processing of crops

The company includes a production unit of the Zaporizhzhia Oil Extraction Plant, which has a sunflower seed processing capacity of 2,800 tons per day and 27 elevators with capacity of the simultaneous storage of 1.1 million tons of silage and floor storage. Elevators at “OPTIMUS AGRO” work with all crops. Almost all can make full train shipments, carried out mostly by railway transport. The company has contracts with the ports of Nikolaev, Yuzhny, Odessa, Chornomorsk, Kherson, Berdyansk. 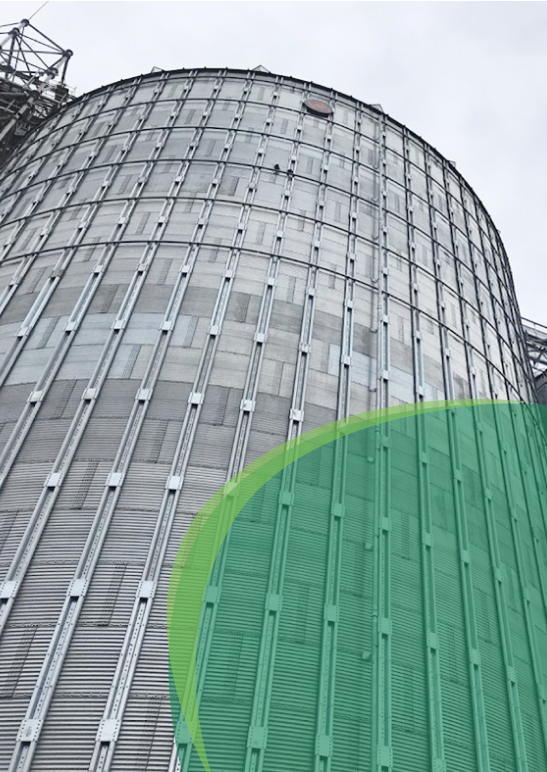 OPTIMUS AGRO is an export-oriented company

In general, this percentage fluctuates between 80-95%, depending on market conditions. The export geography of the company’s products is quite wide. Unrefined sunflower oil is mainly shipped through Ukrainian ports to France, the Netherlands, Greece, Italy, Spain, India, China, Nepal, Qatar, the United Arab Emirates and other countries. Pelleted and non-pelleted meal (used as an additive to animal feed) is exported to Poland, Belarus, Spain, France, China, Malaysia, Myanmar, Vietnam, Thailand, Morocco and other countries. 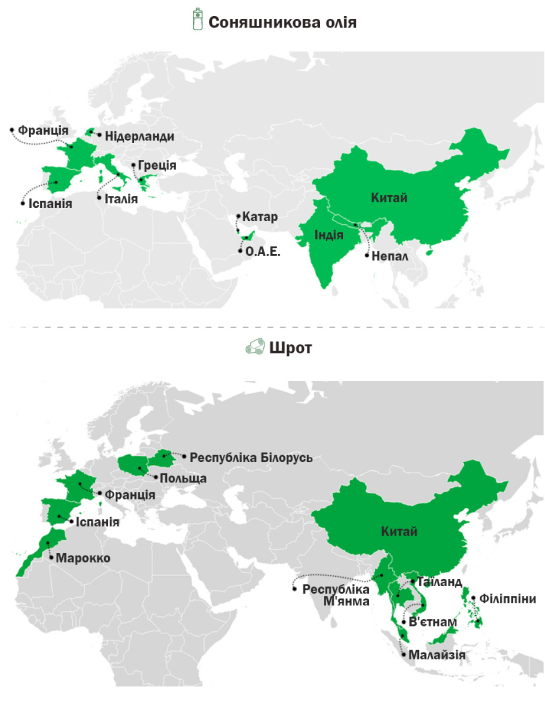 At ZMEZ, raw material storage capacity was increased by 33%. After the commissioning of the granary, the total amount of one-time storage of sunflower seeds at the plant is 30 thousand tons.

Optimusagro Trade LLC has received certificates of compliance with the international standards GMP + B2 "Production of feed ingredients" and GMP + B3 "Trade, collection, storage and shipment".

At ZMEZ, we modernised Polish steam boiler Rafako, which operated on a mixture of gas and husk, to burn only husk. And today we have 100% thermal energy produced from our own raw materials, thus natural gas has become a reserve fuel

Optimusagro Trade LLC has been certified according to the new version of the ISO 22000: 2018 standard.

Optimusagro Trade LLC - received a certificate of compliance with ISCC EU standards (International Sustainability and Carbon Certification) - is a program of voluntary certification of manufacturers and suppliers, which is based on the European Directive on Renewable Energy Sources. The certificate of this standard is recognized by all countries of the world.

Nikopol Elevator LLC "Optimusagro Trade" has successfully passed certification for compliance with the Protocol of phytosanitary and inspection requirements for the export of barley from Ukraine to China.

ZMEZ received certificates of accreditation of the laboratory №2T1623T, "Halal Certification Center" on the basis of the act of examination of production, compliance with the requirements of the "Halal" standard, Kosher certificate from the religious organization "Association of Jewish Religious Organizations of Ukraine".

The Optimus Agro Group is included in the TOP -5 processors of sunflower seeds in the Ukrainian market in terms the installed capacity.

The Optimus Agro brand brings under its brand grain storages located in Dnipropetrovsk, Kirovograd, Kharkiv, Zaporizhzhia, KKherson, Donetsk, and Cherkasy regions of Ukraine in order to improve the quality of control of oilseeds.

Optimus Agro’s long-term relationships with a large network of grain storages in Ukraine ensure a total capacity for simultaneous storage of more than 1.2 million tons of grain. Grain storages are located in key sunflower regions of the country.

The Company signed a long-term contract with Poltava Oil Extraction Plant for processing of raw materials for production and sales of bottled sunflower oil under the Shchedro brand name.

The Company increased its capacity for production of vegetable oil to 850 thousand tons of sunflower seeds per year at an oil-extraction plant in Zaporizhzhia.

The Company continued to increase its capacity for processing sunflower seeds to 400 thousand tons per year. Upon the strengthening of its positions in the Ukrainian market, the Company management decided to expand its portfolio and to reach foreign markets, which resulted in conclusion of the first contracts for the export of sunflower oil and meal.

The Company increased its capacity for processing sunflower seeds to 250 thousand tons.

The Company continued to expand its capacity for purchase and storage and extended beyond the Zaporizhzhia region.

The Company expanded its storage capacity for sunflower seeds through conclusion of a number of contracts with grain warehouses for a volume of 100 thousand tons per year in the Zaporizhzhia region of Ukraine.

The acquisition of controlling shares (buyout) of ZMEZ in 1997 was the result of shared successful performance.

The company’s activities began in 1994 with the sale and exchange of fuels and lubricants for agricultural products in the Dnipropetrovsk and Zaporozhye regions. The main purchased goods were sunflower seeds, which were supplied to “Zaporozhye Oil and Fat Plant” under a tolling agreement.